Rereading Aspasia’s funeral oration–as well as the scholarship and controversy of Glenn, Jarratt and Ong, and Gale that surrounds Aspasia–I noticed the similar tensions with past work surrounding the role of interpretation, accuracy, and recovery. In general, I kept coming back to the standards we use to judge the accuracy of our recovery.

When it comes to Aspasia’s oration in itself, I couldn’t help but think of rhetorical accretion, though Vicki Tolar Burton (Collins)’s term does not come up in the scholarship. Considering the layers of (inter)textual sediment, encountering the image of Aspasia through Plato’s treatment of Socrates’ recreation of Aspasia feels almost comical. Like Conrad’s Lord Jim or Oxymandius’ column from a past post, the distance between the source and the recovery makes Aspasia and elusive figure, which is why I appreciated Ong and Jarratt’s approach to looking at the “discursive space” of Apsasia, not the “real” flesh-and-blood figure.

END_OF_DOCUMENT_TOKEN_TO_BE_REPLACED

Reading Kermit Campbell’s “Rhetoric from the Ruins of African Antiquity,” I thought of letters in a bottle and Percy Shelley. In general, Campbell hopes to challenge what he sees as the overly general treatment in comparative rhetorics, particularly George Kennedy’s  taxonomy between “Ancient Societies Without Writing” and “Ancient Literate Societies” from his seminal text. Campbell argues that many ancient cultures have a complex mingling of oral and written practices, and rhetorical studies of ancient societies often don’t dive into their “variegated and deep” traditions and histories.

Challenging this, Campbell studies artifacts from Axum, Nubian, and Mali cultures, reading examples from the period paired with historical and geographic elements, including stele from Nubia, inscriptions from Axum, and manuscripts from Mali. Overall, he points out the mindful use of ethos and pathos in the works, their variety, and the role they seem to point to in recording events and organizing the society they spoke from.

END_OF_DOCUMENT_TOKEN_TO_BE_REPLACED 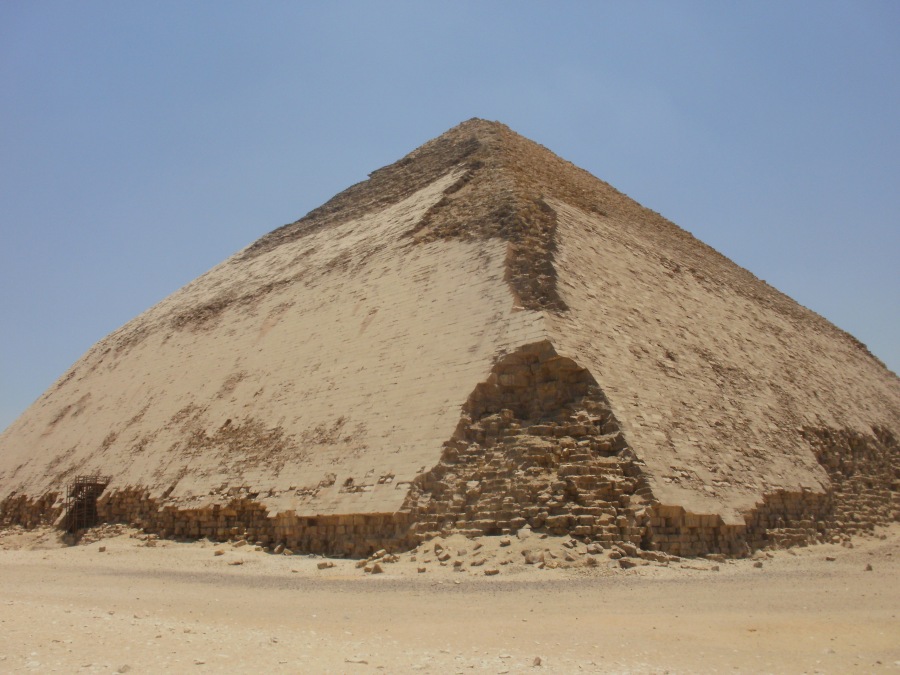 Of all the tombs I visited in Egypt, the “Bent Pyramid,” featured above, was my favorite. Pulling up to the monument, we parked in a barren lot beside a single guard listening to his radio and sipping tea. He approached with a gentle wave before turning back to his small hut. A cyan blue sky arched above, trimmed with a gentle haze to the north, and the Sahara’s dusty gray skin withdrew into flat horizon lines, warbled with gentle hills. Wind kicked up sand, disturbing the silence.

The Bent Pyramid likely marks the transition between the early step-pyramid approach of some rulers and the more recognizable models, like the Great Pyramids at Giza, a design also shared by the Red Pyramid nearby. Archeologists guess that the initial incline proved untenable, requiring a last-minute shift toward the tip.

But I remember the isolation of the pyramid most of all. While the Great Pyramid accompanies the throaty calls of merchants selling overpriced trinkets and Coca Cola to tourists, themselves snapping pictures and gawking at the monuments in a range of languages, the Bent Pyramid–perhaps from its crooked birthmark–remains isolated. And while Giza, itself sprawling from Cairo, continues to fill the desert around Khufu’s great tomb, the Bent Pyramid stands largely alone.

Outside the tomb, my fellow teacher Dea and I sat underneath a rocky archway, overwhelmed by the silence. I listened to the “heartbeat” of the desert, as I then wrote.

But throughout my time in Egypt, I experienced many tombs. Going to and from Cairo, our taxi passed “The City of the Dead,” a nickname given to a still-used necropolis of Muslim tombs inhabited and cared for by poorer families. A series of road- webbed grids, walls, tarps, and low-slung rooftops spilled into the distance, pierced by the spires of the occasional mosque. At sunset, the haze-infused orange of the setting sun timed with the muezzin’s call proved overwhelming.

I also experienced the quiet, bleached streets of Coptic Cairo, where churches held the relics and clothed caskets of saints and religious figures, icons of St. George covered walls, and fans spun slowly from high ceilings over long rows. In Cairo, the bodies of Muslim royalty remained concealed behind the arabesque of mosques, while in Alexandria we wandered the Roman-Egyptian catacombs of Kom al-Shoqafa. In the deserts, beyond the pyramids and their localized buildings, we walked inside the boxy tombs that housed non-royal figures and stood atop the ruined Greek town of Karanis, now little more than blanched stone under a relentless sun.

Outside Egypt, I’ve always been interested in death, from the Roman mummy masks that I perused while lingering in Oxford’s Ashmolean, to the various graveyards and grave sites in Europe in America. But I’ve never thought about the rhetorical power of ritual and death.